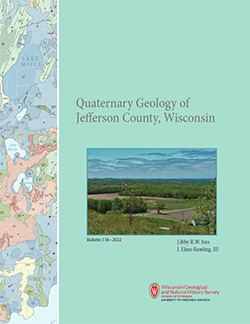 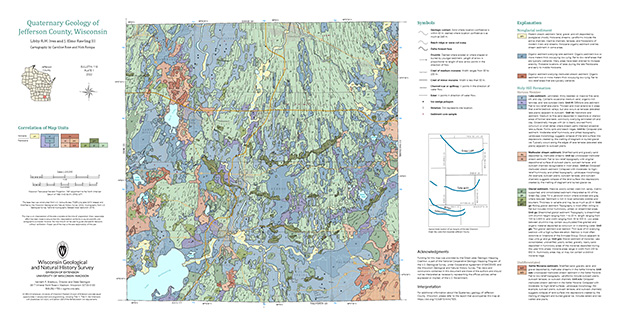 The Quaternary geologic map of Jefferson County, Wisconsin, provides details about the surficial sediment and landscapes that were formed largely in the footprint of the Laurentide Ice Sheet's southern Green Bay Lobe during the late Wisconsin Glaciation (ca. 20,000 years before present). These landscapes include lowlands underlain by glacial and postglacial lake sediment, uplands composed of streamlined till (drumlins), and meltwater-stream sediment. The southeastern corner of the county includes small sections of the Kettle Moraine, an interlobate zone that formed between the Green Bay and Lake Michigan Lobes of the Laurentide Ice Sheet. New radiocarbon ages from bulk plant materials in lake and wetland sediment indicate that the Green Bay Lobe has receded from Jefferson County by approximately 18,000 years before present and that lakes persisted into the Holocene before transitioning to wetlands by approximately 6,900 years before present.